Photographer and amateur astronomer, Tom Martinez, will share his images, techniques and love for astrophotography.

Following the talk, weather permitting, Professors Doug Patterson and Bill Koch will host an observation of the night sky at the Paul Tebbe Observatory atop of CLB.  Visible objects include: the Moon; Jupiter; the Orion Nebula; the Beehive Cluster.

Where: The Craig Auditorium, GEB 233

Tom’s early, self taught, darkroom work and portfolio of prints was enough to get him a job with the Hallmark Cards Photo Lab, where he honed his craft and learned from Hallmarks best photographers. Tom’s love of astronomy merged with photography perfectly when he joined the Astronomical Society of Kansas City in 1978. In the past 35 years he has served the club as vice president, president, newsletter editor and currently ASKC historian.

Digital cameras, CCD astrographs, telescopes and the night sky now keep him busy after retiring from Hallmark Cards in 2006. Tom’s astrophotos have been published in various astronomy magazines here in the USA and abroad. 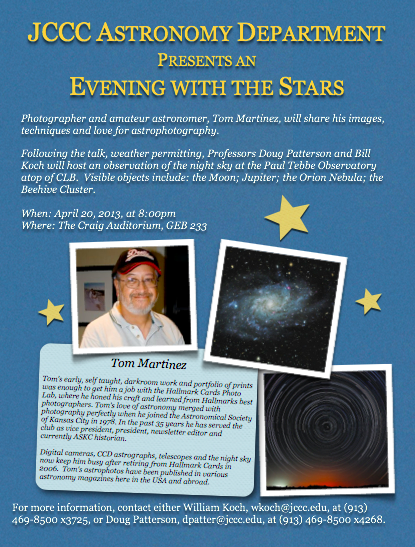 One thought on “Evening With the Stars Spring 2013”