Occasionally, seven TV screens scattered across the college, notifying about a board of trustees meeting coming up. If you blink, you might miss it. Seeing such an advertisement may lead students to wonder: What exactly is the board of trustees and what role do they play for the college?

The board of trustees is the board that provides oversight to the work the college does. Each member holds an elected position that is completely voluntary.  Trustees are elected by the voters of Johnson County and each term lasts four years.

“We are here to represent the people to make sure the tax dollars are spent responsibly and to make sure the incentives the taxpayers and residents have set for the college are held through,” Angeliina Lawson, member of the board of trustees, said. “We also support and evaluate the president. We only have one employee and that is the president. So, what he puts forward and his interpretation of our policy are his domain. We are responsible for making sure policy is upheld. And if there is any misinterpretation of something we can call the president and ask for an update or ask why it went a certain way.”

A way they work to make sure policy is upheld is by discussing, asking questions and ultimately voting for the policy in a general assembly meeting.

“The president runs all the burden, he runs the entire ship,” Lawson said. “It’s his operation, we show up, ask questions, read our packets and make sure what the college is presenting us makes sense. A lot of it comes down to asking questions. I’m not supposed to be an expert on anything, the responsibilities just require you to use common sense.”

Most plans presented at the board meeting are supported by the community and people of the college like the Master Plan Facility. Master Plan Facility is a project indicted to renovate by building new facilities for the college. It is responsible for the Fine Arts and Design Studios, Career and Technical Education Center, renovating the Student Center and more. On the other hand, there might also be some polices everyone might not agree on like vote to increase tuition by $1 in 2019.

“That’s the benefit of having seven members. We might all agree, or we might not. If we don’t, we can respectfully discuss and share our ideas,” Nancy Ingram, secretary of the board of trustees, said.

One important accomplishment both Lawson and Ingram feel proud of is appointing Dr. Bowne as president.

“The biggest accomplishment we have is to hire a president who has a deep passion for diversity, equity and inclusion [DEI],” Lawson said. “I have seen go through just an enormous intense year with COVID. It was something none of us could have ever expected and yet to see everybody around him, his VP cabinet, the faculty, the staff, and the Board of Trustees really embracing what diversity, equity, inclusion and belonging feels like, what it means and being able to act on that.”

Advancing DEI policies has been an important focus of the college in past few years.

“An area that we need to continue to work on and I know that a lot of the board is passionate about is the DEI initiatives,” Lawson said. “The first survey we got back was not what we wanted, and it was a good awakening to know the structures that we have to put into place to improve.”

Although the board of trustees do not write policies for DEI, they play an important role in influencing the policy.

“What we can do is to say, ‘Mr. president we want a deep commitment to diversity, equity, and inclusion and we want a serious action plan of how you’re going to do this in the next meeting’,” Lawson said. “We give the direction; he understands the interpretation and creates a plan. Then, when he brings it back to us, we can advise, question, and evaluate the plan.”

President Andy Bowne also recognizes the important role the board of trustees plays in making the college go in the right direction.

“The board and the president relationship are a critically important relationship,” Bowne said. “They bring tremendous value to the college and I am very fortunate to be able to work alongside people who are committed to the wellbeing of our students, college, staff, and community.”

Another key focus for the board of trustees is to connect with students as much as possible. For every board of trustee meeting, the president of the Student Senate presents an update about the work student senate has done.

“It feels like our work is validated, they are affirming the work students are doing,” Sailor Usher, president of Student Senate said. “It’s really awesome [that] the board of trustees take the time to listen and engage with what the Student Senate has to say.”

The board of trustees and the president have added new initiatives to improving student connection this year.

“We started increasing the student voice in our board meetings,” Bowne said. “We started this new thing where we have a student come present and engage with the board.”

This new segment has been going on for the last two board meetings. One of those students invited to speak was Braeden Althoff.

“I was heavily honored and never imagined such a thing would happen to me,” Althoff said. “I talked about how I overcame challenges in my life. The best part was when the trustees started asking me questions about my story. It made me realize they really do care about the students.”

With the important role board of trustees play at the college, it can be easy to assume only a selected number of people can run for the potions. However, Lawson states that’s not the case.

“The only requirements [to run for trustee] are being a U.S. citizen and over the age of 18,” Lawson said. “It is not a role for a specific profession it is meant to be bring your common sense to the table and your ability to think through a problem and the diversity of seven of those is what the public is wanting.”

For anyone instead in the board of trustees, their next meeting is on April 15. Due to COVID-19, all meetings are online through zoom and anyone is welcome. 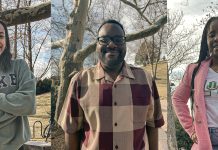 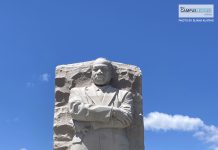