After a season of uncertainty and cancellations last year, the JCCC men’s basketball team was more than ready to start this season with talented freshmen, and a new head coach.

(Chappell Rand) “Coach Jeffers has been here for 27 years and done a lot of great things and I’m sure he did in a certain way so obviously, there’s been some change probably in the whatever some of the basic routines we do every day obviously it’s a fresh start for myself and trying to use the foundation he’s built continue the success and to build on it it’s new from there and most of our guys including the three guys in here is their first year here so yeah we’re building a new tradition.”

With a brand new season, and and impressive roster, the team was determined and excited to complete this season.

(Damond Daniels)“Our goal is to be the number one team in the nation and that’s what we’re looking to impose on our opponents in a good effort good attitude all around and trying to have a winning attitude no matter the outcome regardless of the outcome.”

(Jayland Whitehead) “We wouldn’t let anything get in the way of that.”

(Chappell) “Our guys have done a really good job on defense I think they take a lot of pride in it and obviously we’re going against the best teams in the country that have some outstanding players, but I would say at the end of the day if we want to be successful in advance to the regionals, we’re going to have to do a good job defensively guarding these people we just walked off the court and we’re spending a lot of time on it and so hopefully we’re going in the right direction.”

(Zion Buckner) “My favorite moment was winning the regional championship celebrating in the locker room.”

(Whitehead) “I mean just us going into the season in with the type of talent we had seen it in and out we were focused on winning the national championship no matter if COVID was in front of us or not just us getting to our goals.”

(Daniels) “And we had the potential to complete our goals.”

The Cavs are currently finishing out the post season, making it to the national championship and walking away from the regular season as regional champs. Reporting from The Campus Ledger, this has been Paige Winters. 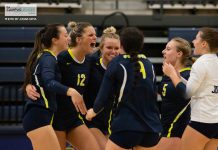 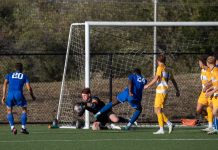