On Saturday 18 April, JCCC opened its doors in gratitude to the continued support of its community. Professors and staff members gave lectures and workshops on a wide variety of topics. Professor Davidson gave three workshops on Egyptian Hieroglyphs, Egyptology: a Virtual Tour, and Ancient Greek.  In the first, participants learned about the history of the ancient Egyptian language, famous pieces of literature (like the Story of the Shipwrecked Sailor and the Dialogue of a Man and his Ba), the Egyptian uniliteral alphabet, and how to write their names in cartouches. The second session highlighted important museums and organizations in the UK, France, and Germany that focus on ancient Egyptian collections, monuments, and excavations; it was a preview for the study trip Professor Davidson and Professor Hull will be leading in 2016. For the third session, participants enjoyed an overview of the ancient Greek language (particularly Homeric, Attic, and Koine) as well as an introduction to the heroes, gods, and monsters of Homer’s Odyssey. If you missed this year’s event, you will have to wait two years until Free College Day is offered again. 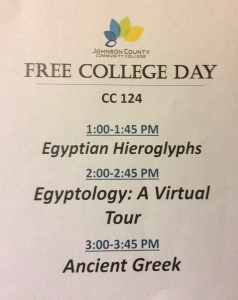 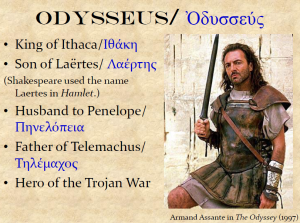