For one Los Angeles-based artist, a story about a college professor’s cactus hobby became the inspiration to craft a piece of art that takes up an entire room at the Nerman Museum of Contemporary Art.

Amir H. Fallah, artist, said he initially got the idea for “The Caretaker” from Executive Director of the Nerman Bruce Hartman.

“I had met with museum director Bruce Hartman, who mentioned possibly working together on a project. He had been familiar with my work and just reached out to me out of the blue,” Fallah said. “When we were talking about my [past] installations, Bruce casually mentioned, ‘You know, there’s this guy who teaches at the school named Mark Raduziner that I’m friends with. Mark is a teacher here and he also has this crazy cactus and succulent collection.”

Raduziner, who advised the Ledger in the 80s and 90s, is a professor and the chair of Journalism and Media Communications at the college, and is beginning his 34th year of teaching here. He’s also the chairman of the Parks and Rec commission in Mission, Kansas and enjoys horticulture.

After reviewing an article printed in the quarterly Your Hometown Mission Magazine highlighting Raduziner’s estimated 300 cacti and succulents, Fallah became more and more interested in the idea.

Now determined to begin his work on the piece, Fallah faced one potentially major issue: Raduziner had no idea about it.

“We started talking about Mark for months and doing this show without ever actually talking to Mark,” said Fallah.

Raduziner’s initial reaction to hearing about the idea nearly prevented the whole piece from happening.

“I kind of didn’t want to do it at first because I work here and I thought it would be kind of strange,” said Raduziner. “[But] I kind of realized that it’s kind of an opportunity of a lifetime, so I agreed to do it.”

Once given the green light, Fallah flew to Raduziner’s home to do his version of investigative reporting. Fallah said he likes to meet potential subjects, visit their home and get a feel for how they live by talking about items they keep in their home.

“I’m interested in the history and the emotional attachments that people have with things that they live with … I think all these objects are charged with memories, history and emotional connection.”

After viewing the cacti throughout Raduziner’s home, Fallah spotted beautiful needlepoint pillows throughout the house, which Raduziner stated were all made by his mother. Old coogi sweaters from Raduziner’s late father also drew Fallah’s eye. These two items and their emotional meaning became two key pieces of Fallah’s installation.

“A pillow is something that we all rest our head on, something that gives us comfort. We usually use a pillow when we’re in bed sleeping, at our most vulnerable. What goes with a pillow? A blanket. It’s a set. So I started thinking about parents, who are a set usually … they’re there to serve, protect and comfort us. I decided to make a blanket out of the coogi sweaters,” Fallah said. “For me, I’m trying to describe the person through the objects they live with and surround themselves with because I think that paints a much more interesting and truer picture of what that person is about and what they’re like … Every single painting is a portrait of Mark.”

Raduziner feels the piece does show aspects of his life, but only a small picture of his life as a whole.

For more information on Amir H. Fallah and “The Caretaker,” visit http://www.amirhfallah.com/. Art will be on display at the Nerman until Sept. 27. 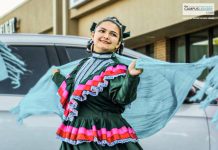 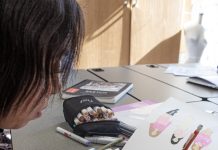