Ethan Bilyeu is a JCCC student and the new Community-Based Learning work-study employee. We are very excited to have him on board! Below is a piece he has written on his volunteer experience in Spain. 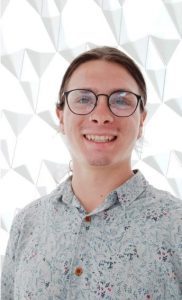 “This past spring, I had the opportunity to study abroad in Seville, Spain, which is an enchanting place to live and study for a semester. I was part of a group of about 30 students from across the United States who descended upon the primitive city, eager for adventure and excitement in a foreign place. During our time together we became close-knit, almost like a family away from home. In between classes and nightly tapas with friends, I volunteered at a local hospital and an after school program that was known as el colegio safa blanca paloma. This was an excellent way to fully immerse myself into the community and foster an interconnectedness with the people of Seville. It was also a perfect opportunity to practice speaking Spanish, for that was a main goal of mine while studying in Spain.

In both the hospital and school, I worked with kids, who are, in my opinion, much less intimidating than adults when trying to practice a language. Every Tuesday afternoon after class, I hurriedly ate a nutritious Mediterranean-diet lunch prepared by my loving housemother, and I walked with two other students to the school, which was a good forty-five-minute trek. We ventured far away from the touristy part of Seville, which is aesthetically charming, and found ourselves in a notably poorer area of the city; graffiti and trash littered the streets where small, worn-out apartments cast cool shadows on the cars lining the sunny street.  Upon arriving, the kids were always thrilled to see us, and their bright smiles became the only thing we noticed. The school offers programs for children pre-k through middle school aged. Our job was to assist coach Luis, who led recreational activities and games. The kids in his group aged from 7-12 years old, and that was the usual number in the group as well.

The kids wore roller skates as we ran and chased around the concrete courtyards playing various tag games. If it was raining, the activities were moved indoors to the gym. The kids adored coach Luis who was patient and gentle, yet had a firm presence as he broke up quarrels and directed the children. The kids were intrigued by us and were eager to engage us, and one sweet boy in particular proclaimed his undying love for each of us in turn. It always seemed that our time spent at the school playing and laughing with the kids passed too quickly. Tuesday afternoons became a highlight of the week for me, and a welcome contrast to studying. However, what I learned from my afternoons at the school was in its own way a form of studying. My time there had a greater impact on my Spanish speaking abilities than reading a textbook.

On Thursdays I volunteered in the children’s ward at the hospital, which was perhaps more personally rewarding than volunteering at the school. It was a much shorter walk to the hospital than to the school, and I had time to breathe in the refreshing, warm air of Seville as I made my way down the street. It took me a while to get used to walking everywhere in Seville, but once I adjusted, I realized it was a nice way to slow things down and gave me time to reflect on my studies and volunteering. The hospital was a popular place to volunteer, both for students from the United States and Seville. The first day there was an overflow of volunteers, who were mostly American students eager to give their time for a worthy cause and practice their Spanish. Yet, as the weeks went by, fewer and fewer volunteers showed up, until eventually it was just another girl from my program and I, and three girls from Seville. Every week we met in a space dedicated for kids to have fun and forget their pain for a few hours. The classroom was full of every toy and game you could think of; shelves lined the light blue walls with activities that would distract and uplift the sick children, and indeed their parents.

From playing the popular game Headbanz in Spanish, to painting a picture, to working a Spiderman puzzle, to smashing together action figures, we did whatever the kids wanted to do. This was their time and space where they had control of something in their life that was overwhelmed with sickness. Some children were there recovering from minor surgeries or broken limbs and were in and out of the hospital during my time volunteering. Others were dealing with greater struggles, which were marked by the tiredness in their eyes and scars on their bodies; these children I saw and played with every week for the entire semester. About halfway through the semester, the playroom was shut down for construction, and this meant that we had to go room to room to interact with the kids. Always asking permission first, we would enter a room, which usually housed a couple of patients. This more intimate setting was intense at first, but I grew to embrace the opportunity it provided to get to know the boy or girl more personally. The relational aspect of interacting with people is what makes service-learning so effective and beneficial, both for the student and community.

My time volunteering significantly affected my experience in Spain. If I hadn’t engaged in service-learning, I would have spent more time interacting with American students, which isn’t necessarily a bad thing. However, I cherish the relationships that I formed at the hospital and at el colegio safa blanca paloma, and everything I learned about Spanish culture and language through serving the community. Connection and relationship are two key components of service-learning. It is the interaction and sense of community fostered in service learning that proves its value. Volunteering abroad provided my experience with a wholesome balance to the fiestas and fun with friends that oftentimes accompanies studying abroad. I had the opportunity to develop an interconnection to Seville in a meaningful, tangible way: through its people. I would recommend service-learning anywhere, but especially while abroad, for it is a way to know a place intimately and engage its culture wholeheartedly.”