The Writing Center is currently hiring student tutors for the 2017-2018 academic year. Applicants must:

If you know a student who enjoys writing, likes talking with other writers and enjoys the process of collaboration, have that person apply today. Tutors gain a stronger understanding of the writing process, increase their communication skills and may receive CRLA certification.

Those interested should apply on the JCCC jobs page, and see job listing #170502. Only those submitting a complete application will be considered for the position.

The Common Read launch for the Fall 2017 selection Just Mercy by Bryan Stevenson was held Wednesday, April 5, in the Collaboration Lab. Attending this event was Tricia Bushnell, Director of the Midwest Innocence Project, who spoke briefly about her work with Bryan Stevenson and her commitment to the cause of social justice.

–Professor Danny Alexander was featured in Episode 8: The Silver Screen and all Magazines at www.iconoclasofthings.com podcasts.  Professor Alexander of Rock and Rap Confidential was interviewed about music writers who were particularly influential in his career.

–Professor David Davis was the keynote speaker at the conference for the Kansas Association of Historians on Friday, April 14. His presentation was on science fiction in Kansas.

–Writing Center Director Kathryn Byrne and Kate McNeil, Professor of Accounting, were awarded a Perkins Leadership Grant to develop, pilot, and evaluate six online writing tutorials to be used in Accounting II courses.  These modules will focus on frequent grammar and citation mistakes that plague many accounting student’s writing.

–Professor Steve Werkmeister’s poem “Detasseling” was published in the Silver Birch Press’s My First Job series in May.

The Journalism Department Give Headline Award

The Department of Journalism  presented their Headline Award to Yael Abouhalkah, a former Kansas City Star columnist. He gave the presentation “Real Journalism in the Era of Fake News” on Thursday, April 20, in the Hudson Auditorium.  Each year, the Journalism and Media Communications department honors media professionals whose work serves as an inspiration to students. Recipients must have spent all (for retired professionals) or a majority (for professionals currently working) of their career contributing to the field of journalism and media communications. 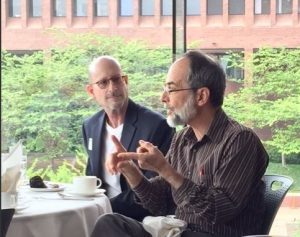 Adjunct Professor David Cantwell will attend the Pop Conference at the Museum of Pop Culture (formerly the Experience Music Project or EMP) in Seattle. PopCon is an annual gathering of academics, critics, journalists, and musicians. The theme this year’s conference is “Sign O’ the Times: Music and Politics,” and Professor Cantwell’s presentation is “Johnny Horton’s ‘The Battle of New Orleans,’ ‘Johnny Reb,’ and Country Music During the Civil Rights Movement.” He will also be moderating a panel, titled “Post-Dixie Chicks Country Music.” He has also been selected as the 2017 honoree for Rolling Stone‘s “Chet Flippo Award for Excellence in Country Music Journalism.”  He will receive that honor in Nashville in June, at a luncheon during the International Country Music Conference (ICMC), where he will also be presenting a paper.

This entry was posted in Uncategorized. Bookmark the permalink.