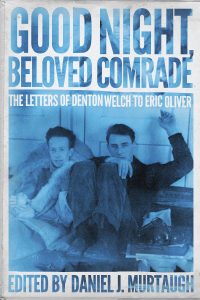 In February, 2017, The University of Wisconsin Press published Good Night Comrade: The Letters of Denton Welch to Eric Oliver, edited by Dan Murtaugh, adjunct professor of English.   Here is some information that Dan provided about the subject of his book:

Denton Welch (1915–48) died at the age of thirty-three after a brief but brilliant career as a writer and painter. He published four novels published between 1943 and 1950: Maiden Voyage, In Youth Is Pleasure, Brave and Cruel, and A Voice through Cloud, as well as a large body of short fiction and poetry. The revealing, poignant, impressionistic voice that buoys his novels was much praised by critics and literati in England and has since inspired creative artists from William S. Burroughs to John Waters. His achievements were all the more remarkable because he suffered from debilitating spinal and pelvic injuries incurred in a bicycle accident at age eighteen.

Though German bombs were ravaging Britain, Welch wrote in his published work about the idyllic landscapes and local people he observed in Kent. There, in 1943, he met and fell in love with Eric Oliver, a handsome, intelligent, but rather insecure “landboy”—an agricultural worker with the wartime Land Army. Oliver would become a companion, comrade, lover, and caretaker during the last six years of Welch’s life. All fifty-one letters that Welch wrote to Oliver are collected and annotated here for the first time.

To learn more about Dan’s book, follow this link to The University of Wisconsin Press site: https://uwpress.wisc.edu/books/5569.htm.