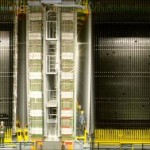 One thought on “Faster than Light Particles?”