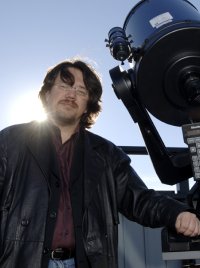 After earning a B.S. in Physics from Central Missouri State University (now University of Central Missouri), I moved to Muncie, IN and worked toward my M.S. in Physics at Ball State University.  While there, I was introduced to CCD photometry and cataclysmic variables.  My research there took me to Lowell Observatory in Flagstaff, AZ where I got my first taste of genuine scientific research and observational astronomy.  I was completely hooked! …at least on the research part.  Oddly enough, the staying up through the wee hours of the morning never really set well with me.

My M.S. in Physics in hand, I moved back to the Kansas City region and began working at Johnson County Community College as an Adjunct Professor of Physics.  At first, I thought my employment here would simply be a résumé builder and that I’d move on to a university in time, but the longer I work here at JCCC the more I fell in love with the place.  In 2001, I accepted the position of Professor of Astronomy and have taught astronomy and physics here ever since, and plan on doing so until my retirement.

Having been here at JCCC since 1993 doesn’t mean that my research and education was put on the back burner.  In 1997, I returned to the student-side of the classroom at the University of Kansas and began work on my doctorate.  Studying space plasma, and specifically solar energetic particle events, under Dr. Tom Armstrong, I began to find my real passion in science. As I mentioned earlier, I loved the data analysis aspect of the binary star research I did at Ball State, but I’m not really cut out for the all-night observing sessions. (odd for an astronomer, I know) Researching space plasmas and the energetic particles in the inner heliosphere gave me opportunity to immerse myself in all the data analysis, programming, and reverse engineering of the instruments we fly on various spacecraft I could stomach, and sometime more!

As I continue to teach astronomy and physics here at JCCC, I also continue the work I began at KU with a private company in Lawrence, KS, Fundamental Technologies.  There, we work on data production, analysis, and archiving for data from the LECP instruments on Voyagers I and II (yes, they’re still alive and well), the EPAM instrument on the Advance Composition Explorer, the HISCALE instrument on Ulysses, the CPME instrument on IMP-8, the MIMI instrument on Cassisi, and we will soon begin work on a new mission to the Van Allen trapped radiation belts. 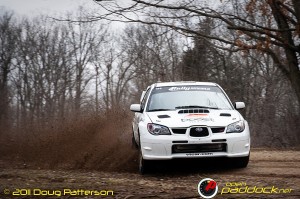 In my personal life, I have several passions that keep me busy during the summer break.  When I’m not teaching or analyzing solar energetic particle data, I can often be found at a race track taking photos for OpenPaddock.net.  I have always been a fan of motorsports, especially rally and open-wheel racing, and I’ve also have a newly rediscovered passion for photography.  What better way to enjoy both than by landing a gig as chief photographer for a racing website?

When not at a race track, I’m often helping my wife with her photography business, Patterson Prints, or playing poker. I’ve always enjoyed games, especially card games, and poker combines a lot of aspects that I really enjoy. Its a game that requires successful players to think hard about long-term and short-term strategy, sometimes sacrificing one for the other, to mentally outmaneuver their opponents, and to be able to quickly estimate odds and assess risk. In my opinion, poker is the most exciting, most challenging, and most rewarding game around! As poker legend Mike Sexton is fond of saying, “It takes a minute to learn, and a lifetime to master.”