Davids attended JCCC and the University of Missouri-Kansas City before finishing her degree at Cornell Law School.

According to David’s, JCCC has a wide variety of classes that can help students find what they desire to do while also learning important life skills.

“It’s a common misconception that adults know what’s going on,” Davids said. “We’re making educated guesses as we go. I didn’t know what I wanted to do with my life, and I took a ton of different types of classes. “In fact my favorite class at Johnson County Community College was small engine repair.”

Davids also talked about the different programs at JCCC besides liberal arts. Davids praised the National Academy of Railroad Sciences at JCCC. Her main point about them was how our infrastructure could not survive without their help. According to David’s students that come out of that program a large part of both Kansas’ and our country’s future.

“Johnson County Community College has a great rail program,” Davids said. “And rail is actually one of the most important infrastructure things that we can invest in to make sure that we’re actually getting goods across the country where farmers are growing and producing stuff. Rail is a huge part of how Kansas is literally feeding the country and the world.”

“We really need to have a big youth turnout in November because it makes such a difference, because you’re the ones who are really impacted by this,” Corson said.

Voting and activism is how you make a difference, Corson said. He encouraged everyone who is or has voted to talk to those around them and encourage them to vote. Corson encouraged students to talk to either their classmates, neighbors, or family about voting. Corson wants young people to vote to have a larger turnout in the upcoming midterm election than in previous elections.

Corson also discussed reproductive rights. With the recent overturn of Roe vs. Wade, he discussed how young people will be affected by this. It is unfair to women’s personal health and private decisions and that it should be a constitutional protection.

“I think it’s obviously an issue that affects younger people more because they’re the folks who are thinking about when they want to start a family,” Corson said. “So, I think it is something that young voters in particular really need to make their voice heard on, because the Supreme Court has rolled back a protection that had been in place for 50 years.”

Climate change was the final issue that was talked about. This is another issue that can be fixed by voting and activism according to Corson. It is something that young people coming of age will be affected by more than anyone, Corson said.

“If we don’t take really aggressive action, we’re going to see a huge amount of devastation to our climate, a huge amount of warming that’s going to cause all sorts of disruptions across the world and also here in Kansas in terms of our agriculture, our crop production, and our ability to be the breadbasket to the nation, Corson said.”

After the speech both Davids and Corson were available for pictures and questions. Corson encourages students to visit Topeka for a tour of the capitol with him.

Several students were interviewed afterwards about their opinion of the speech.

“I thought it was really awesome that she pushed that it is okay to start slow and figure out what you want,” Eden Haack, sophomore in liberal arts, emphasizing criminal justice, said. “You don’t have to come to college and leave with the plan you came with. It’s set up the road for students to expand their horizons. I think Davids is really helping to expand that even more.”

“20,000 Leagues Under the Sea” by Jules Verne will be discussed in the upcoming Great Books Series

Giving back to the community 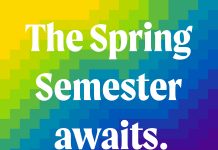